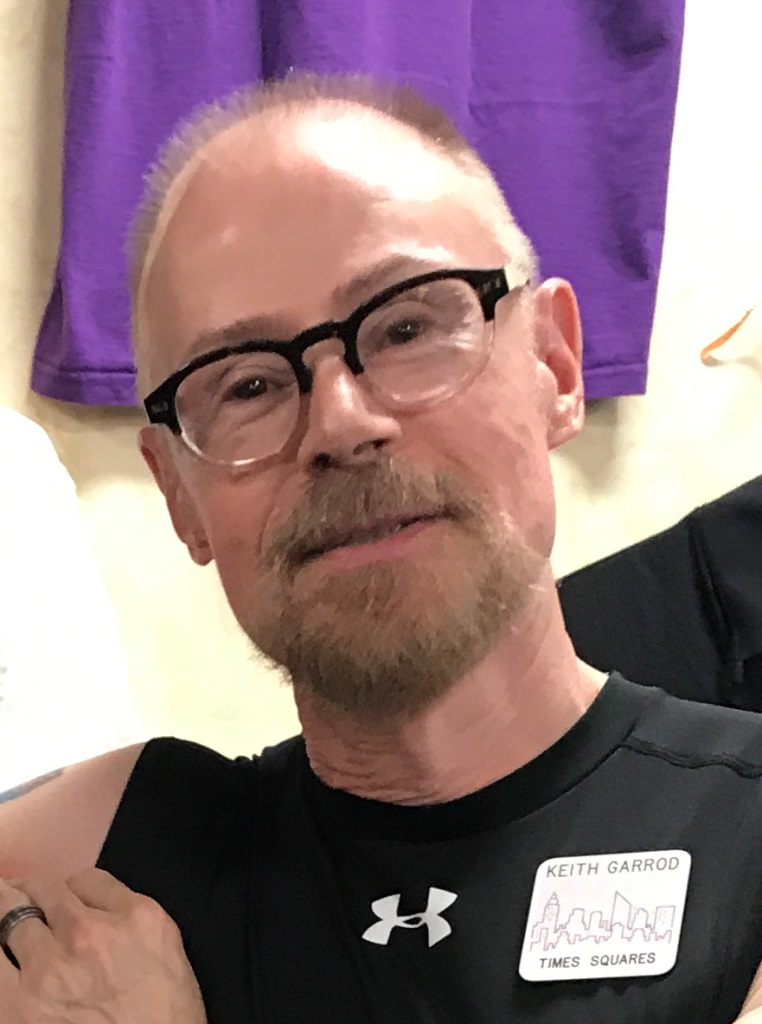 I became a member and graduated in 1989.

After my first trip to the Catskills, I fell in love with America outside of New York City. That weekend I stayed at a friend’s cabin in the mountains in a town called Margaretville. The trip coincided with the Delaware County Firemen’s Parade, complete with food vendors, a flea market and two beer trucks. While there wasn’t any dancing, I became fascinated with “Americana.” Through a friend of a friend, I met a Welsh woman who was visiting from Portland, Oregon. She was a square dancer and her enthusiasm was contagious. Meanwhile, at the wig studio where I worked, a costume designer, Lindsay Davis, a Times Square member, kept trying to convince my boss to attend the next introduction night, but he was far too uptight to ever let his hair down (pun intended), so I went in his place and was sold after my first twirl, ready to sign-up for the class of ’89.

I grew up in a quaint quiet town named Teddington, located on the river Thames, part of the outer suburbs of West London. We lived in a modest Victorian house with stained glass windows on the front door. Our garden backed onto a bomb site, mostly left untouched from World War II, which attracted many children as a playground. Noel Coward was born in our town and its other claim to fame was Benny Hill, a local resident. His show was filmed at Thames Television Studio, beautifully situated close to the river.

My uncle, a portrait artist, lived in San Francisco and New York in the mid ‘60s. His stories of America intrigued me as a child. As a young man, a wonderful friend named Julian moved to New York. He was also an artist and moved to work as an illustrator at his brother’s publishing company. His earlier works in the ‘70s is included in The Joy of Gay Sex. When I was still  in my twenties, he invited me to visit him, sending me a plane ticket for my birthday. That trip convinced me that New York was the city I needed to live in; it made me feel alive with inspiration.

You trained as a wigmaker. Any brushes with celebrities? Who was the most famous person for whom you made a wig?

During my career, I made wigs for dozens of actors: Paul Newman, Jessica Lang, Glenn Close, Madonna, Nicole Kidman, Sir Anthony Hopkins, to name but a few. It was rare that I was directly involved with any of the actors—I was locked away out of sight in the sweatshop! Those I spent time with included Angela Lansbury. I made her a cup of tea and afterwards she complimented me. It was the best cup of tea she’d ever had while living in America. On another occasion, I went to the home of Olympia Dukakis in New Jersey. I was taking measurements for a wig foundation. It was not long after the series, Tales of the City. She made me feel very at home, was extremely down to earth and good fun. The third actor was Sigourney Weaver. Again, it was for a foundation fitting. I was working for a different company then as the manager. She arrived exactly on time with no entourage in tow. I found myself interviewing her about her life career and I had a wonderful time.

What is something about you that not many people know?

As a confused teenager, David Bowie was my inspiration, he was the only person I could identify with, and his music took me away from reality. Back then, nobody could have ever predicted how influential he would become in the music industry, he was a genius, way ahead of his time and I adored him.

And then as a young adult in my twenties I was trying to enter into the world of theatrical wig dressing—no easy task. The wigmaster, Danny, on the show “42nd Street” at the Drury Lane Theatre in London had been recommended as a possible contact. I had experience as a wigmaker but not a dresser. Danny took me at face value for a trial period. I wasn’t a fast learner and kept taking wigs to the wrong dressing rooms, I was easily confused in such a strange environment. Things weren’t looking too bright for me, but then suddenly, the proverbial penny clicked and my confidence soared. He was and still is an incredibly talented, artistic man, who to this day is one of my closest friends. If it wasn’t for him my career may have turned sour. He was also instrumental in helping me secure a position as a wigmaker with the BBC—that job was the leverage for my future career. Years after the fact, he told me that he was going to have to let me go, unless I got it together, and then that night I was “transformed.” He continues to inspire me, with his wicked sense of humor about dealing with getting older, I love him, he is a rare gem indeed.

Outside of dancing, I like to write. I started five years ago and it’s been very rewarding but frustrating at the same time. Computers don’t like me, and vice versa, but at this point in my life handwriting is not an option!

I recently finished reading Alice Hoffman’s The River King. I think she’s brilliant, and I love her style. The book I’m now reading is Anne Tyler’s A Spool of Blue Thread. She’s a new author for me, so far I’m impressed. As for TV, we haven’t had a set in our home for probably close to seven years. I have access to Netflix, but I haven’t watched a show or a movie in what seems years, for whatever reason I have no desire, probably having to endure people watching shows on their devices on the subways on full volume has something to do with it!

What would you do if you had super powers?

If I had super hero powers, I would turn back the hands of time to reverse the damage caused by climate change, and find a solution to never allow it ever to happen again.