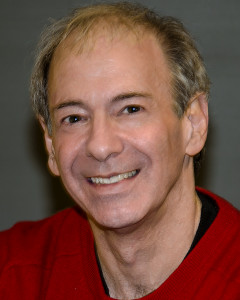 I was looking to get involved with an activity; I had “lost” my life partner to AIDS. The choices at the time were speed dating, political activism, gay folk dancing or a 12-step group (but since there were no 12-step groups for gemologists, that was limiting.)

I did however have a very dear friend who was in a 12-step group and he introduced me to Matthew Cooper. We hit if off (strictly platonically…I know, hard to believe) and the three of us were talking about gay groups, including dance. Matthew mentioned that he was a member of a gay square dance group here in Manhattan, and the club was holding its last open house of the season and invited me to “check it out.” Since Matthew was adorable, and sweet, and the open house fell on a night I was not teaching, I went, I saw, I danced. The rest, as they say, is history…

You have served on the board of directors since the George H.W. Bush administration. How do you sustain such commitment and leadership?

This was the first time that I had joined a group, especially in the world of dance. I loved the activity, and was taken under the wing of the original members. I saw the love and dedication in them. Since I had a good eye for spatial relationships and wanted to contribute to work for the club (I believe in giving back). I offered to look into helping out with space rentals. I understood the dynamics, spatial requirements, and equipment needed for our activity and liked to work with people. Since I was devoting a lot of time to this, I figured I would simply run for the board; this would allow me some “clout” when dealing with the rental process. Otherwise, it would have been “Hi, I’m Michael and I would like to reserve a space for square dancing.” Better to be “Hi, I’m Michael, a Board member of and space booker for Times Squares Square Dance Club.” Much better.

What’s kept me going is the activity itself. I simply love it – the good, the bad, all of it (the bad times makes you appreciate the good times). The concept that eight people plus a caller get together to simply have a fun time moving – hopefully in sync with each other. No one wins, no one loses. It’s one of the few activities that I have kept up with for over 30 years. And I still love sharing the fun with others.

I also realized that I never wanted to be the “big kahuna” of the club – I never felt the need to run for President. I saw that position filled by many, and have supported each one. An observation made by a very dear friend and past president, multiple times, struck me, that many former presidents do not continue to dance after their tenure are up…hmmm (scratch head emoji). I don’t believe that would be the case with me, but I am very comfortable with and truly enjoy my responsibilities. The work is not killing, though sometimes, the going can get heavy. Over the years, I have been assisted by wonderful and kind members, who have gone beyond merely suggesting places for me to look into – they have taken on the responsibilities and have done the leg work, and together have found new places, for which I am grateful.

Where did you grow up? What brought you to New York Cityy?

I was born at Columbia Presbyterian Hospital, then moved 8 days later to New Rochelle (the home of Rob and Laura Petrie, and only 45 minutes from Broadway). I regarded New York City as my backyard – a place to play – and began exploring Manhattan after my parents let me commute on the New Haven Rail line at age 13. My grandmother got me seasonal opera tickets to the NYC Opera, which gave me a perfect excuse to walk past the D&D building (well, not really, but at 14, you can find real creative ways of getting to Lincoln Center from Grand Central via the rather gay eastside and Bloomingdale’s….just a bit of veering…lol).

I have to confess that I am a Francophile (….no, that does not mean I love Spanish dictators of the 20th century.) When I was sixteen, I was lucky enough to have spent a summer abroad at my hometown’s sister city, La Rochelle, with a French family. I have tried to visit whenever possible. My great uncle was a member of the foreign service during WWII, stationed in Grenoble and, later, Paris. He inspired me as well, and introduced me to his godson and his family in Vaucresson and St. Cloud. French was one of four majors I pursued in college, and SUNY Albany had some great French courses. Heck, when they name a kiss after a country, it’s kind of neat.

Another Fun fact: I have really great hands for massages (and they are not arthritic, yet…lol).

There have been two individuals who have had a profound impact on my life, more in terms of education. Mr. Antonio Blackburn, my high school art instructor (who taught me almost everything about art and design that I know) and later on at Bridgeport Industrial Design, and Mr. Robert Redmann, who taught me the rest. I have modelled my teaching style very much along Mr. Redmann (who was also the chair of the Industrial Design department). He was a contemporary of Buckminster Fuller and worked for Norman Bel Geddes, the first recognized Industrial Designer, (and yes, the father of Barbara).

Besides, people in general (for the most part), my family, friends, and relationships, I also enjoy myself (quarantining was not a problem for me, though I am a social animal…lol) and spending time alone is just dandy (being sent to my room when young was never a punishment, my brothers were not as amusing as my blocks and imaginary friends; and if the family core felt I was “de trop” that was fine with me; I found out that if I played upstairs alone long enough, I would eventually get room-service dessert, and a formal invitation to join in watching TV; generally accepted the former, and declined the latter.

I truly enjoy traveling, but don’t indulge as much these days. So I love to explore new places in NYC and the environs…enjoy rides, long and short, to nowhere in particular, finding out of the way flea markets, small obscure hamlets and villages. I come from a car-driving family (Suburbia baby here) and I really do like to drive (it’s the other drivers who “drive” me crazy…lol).

Because I just can’t handle all the other channels, I have been OD’ing on TCM; I just discovered MeTV (Memorable Entertainment TV) – and realized why I never cared for Westerns, though since I never watched them when I was young (remember I was in my room having a great time..), I watch them now and enjoy the eye candy….Chuck Connors…omg…!

Jane Austen is always great, and like Kris Jensen, I confess I am a Georgette Heyer fan (why hasn’t the BBC gotten a hold of them…they would be perfect…not your run-of-the-mill Regency romances/bodice-rippers. Heck, even got my mother hooked on em…lol).

What advice would you give to yourself at age 15?

“Don’t worry, the baby fat will re-distribute itself; you will not always wear out the insides of your corduroys; you will get contacts eventually so you don’t have to deal with nose and head pain from those heavy glasses.”

“Oh, and don’t obsess over Eliot F. As boy crushes go, he’s not worth it. Yeah, he’s got jet black hair, green eyes, and a killer smile, but his personality is not going to get any better. (And, FYI, his looks and body will go off early, and you are going to outlive him anyway…lol).”

“Oh yes, your brothers really are psychotic, it’s not you…”