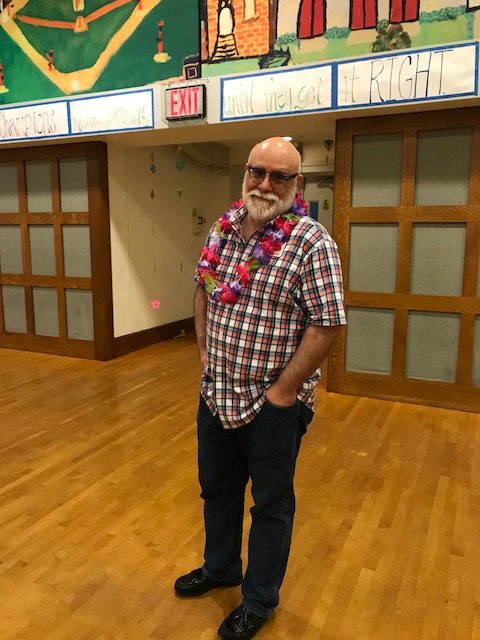 How long have you been a member of Times Squares?
I joined in 2013.

Why did you join Times Squares? Who convinced you?
My only fond memory of gym class in grades 1 through 12 is square dancing. (There was that time I saw one of the gym teachers naked in the locker room, but that’s another story for a less wholesome publication.) As an adult, I stumbled across a square dancing night at Jones Beach once or twice and had a blast, but it never occurred to me this was something people did on a regular basis.

Fast forward a decade or two to when I met Bob Bauer. He mentioned square dancing a couple of times and suggested I check it out. Square dancing with a roomful of gay men sounded like fun, but I had a hellish job with crazy hours at the time and couldn’t commit.

Fast forward once more to 2012. I had a new job with much better hours and a severe case of depression after the death of a loved one. Bob again suggested square dancing, this time as a way to pull me out of my funk. He took me to an open house at The Center, and the rest is history. (Bob, I owe you a debt I can never repay.)

Where did you grow up? What brought you to New York City?
I’m a native New Yorker, species Lawn Guyland.

When/how did you get your nickname Ping? Does your family use it?
When I joined AOL in the mid 90s, I had a hard time coming up with a screen name. AOL blocked anything with my first and last name initials (MD). I went with my first and middle name initials instead (MF), not realizing until later what that means in shorthand to most people. The rest of the name came down to two options, both based on characters from my favorite children’s books. I went with Ping (as in The Story About Ping).

Apart from square dancing, where I started using Ping because there are way too many Michaels, the nickname is used by my online movie and music trivia pals even though our games and gatherings have mostly moved offline.

The name not chosen? Nutkin, as in The Tale of Squirrel Nutkin.

What is something about you (a fun fact) that not many people know?
I have been through five bank robberies, three of them in oine summer. If thats not fun enough, I also have a lazy right eye. (Okay, so I’m dull.)

Who inspires you?
That depends on the reason I need inspiring.

What else do you enjoy beyond square dancing?
I have been a trivia junkie for as long as I can recall (film, television, and pop music trivia in particular.) For years, I was part of a few groups that held online movie and music trivia games. For twenty-five years straight now, one of the music trivia groups still gets together online every other Friday night, and once a year we gather in Cleveland for a weekend of music trivia debauchery.

What are you binge-watching?
I’m about to start watching A Place to Call Home, an Australian series described as “a compelling melodrama about love and loss set against the social change of the 1950s”.

Did you watch any of the Tokyo Olympics? Any favorite events or thirst-traps?
Despite all the “thirst traps” (I had to look that up), I have never watched an Olympic event in my life. When I was ten, however, I did tear out of Life Magazine the iconic full-page color picture of Mark Spitz  wearing just his swim trunks and gold medals. My mom found it in my desk drawer a few weeks later and threw it out. (I suppose I could have used that story to answer the inspiration question.)

Boxers or briefs?
Briefs under jeans. Boxer briefs under dress pants. I own one pair of boxer shorts that is for emergency use only.