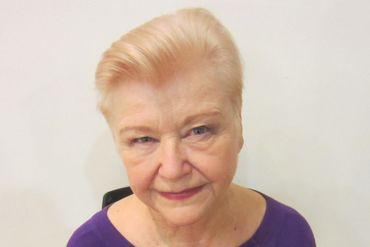 Terry was born in Buffalo, New York, and came to the New York City area in 1965 for the World’s Fair. She lived on Long Island for a while before moving into the city. Professionally she worked as a nurse.

Like many Times Squares members, her only prior experience with square dancing was in grade school. Asked how she heard about Times Squares, she replied: “From my daughter’s friend Jorge. He dances with the Lone Star Lambdas in Austin, Texas. And I came to Times Squares with my daughter for lessons.” [For more about her daughter Jennie Jones, see Jennie’s own profile.]

Terry said she finds square dancing “fun, and much more challenging than I thought it would be. I’m surprised at how much I love it.” Asked to comment on whether she has felt welcomed at Times Squares, she replied, “I’m overwhelmed by the love, acceptance, and amazing people at the club. I look forward to every positive aspect that square dancing provides. I can’t talk it up enough.”