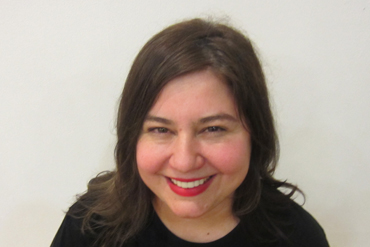 Jennie Jones was born in Long Branch, New Jersey, went to college at the University of the Arts in Philadelphia, then moved to New York to find a job in textile design. These days she is Creative Director at Liora Manné, the innovative design company that specializes in home furnishing textiles for everything from indoor and outdoor furniture to pillows to rugs to wall furnishings.

Asked about her prior experience with square dancing, Jennie replied, “Only in grammar school (shocker!).” She learned about Times Squares from a good friend of hers named Jorge, who lives in Austin, Texas. “He had been doing it there for a few years, and encouraged me to try it. He also sent me a link to your website,” she said. “Jorge told me how much fun he had been having and how nice the square dancing community was. I thought I’d give it a go. He also encouraged my mom Terry to try it out, so it seemed like a nice way to spend more time with mom, as well as get some exercise and learn something new.” [For more about Jennie’s mother Terry Ellen Smith, also a graduate of Times Squares’ 2017 Mainstream class, see Terry’s own profile.]

Jennie found the Mainstream class both challenging and fun. “Some days things click, and on others not so much,” she remarked. “But when you get in the groove and can follow along without a misstep, it feels very rewarding.” She added: “I’m surprised at how huge the following is. Who knew this whole other world was here?”

Asked if she felt welcomed by Times Squares members, she said, “Absolutely! The people I’ve met at Times Squares are the nicest, warmest, and funniest people. I’ve never felt unwelcome.” As for enjoying the physical and mental exercise square dancing offers, she said, “Yes, I do enjoy it. Much more exciting than a treadmill.”