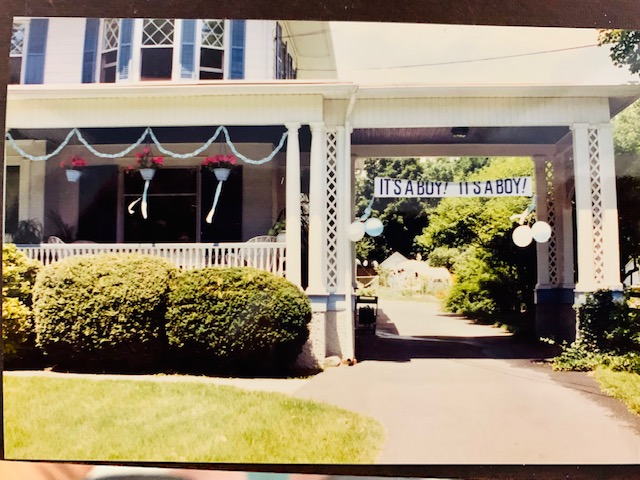 Hal Klein, a founding member of Times Squares, recently sent in this summary of what’s been happening with him, his husband Mitch Mermel, and their adopted son, Michael Joseph Mermel Klein. This is their story.

“We were waiting to adopt a baby long before the Peel The Apple [1989 IAGSDC] convention and we finally got the word on June 18th, 1990 (the day after Fathers’ Day) that our son Michael Joseph Mermel Klein would be coming home with us the next day.

That Sunday was Pride Day in NY and Michael, with us only 6 days and in his stroller, was part of the Times Squares group coming down 5th Avenue.

In July, Michael Gravois and Joe DiSabato, both who had joined the club the same time we did and who we chose as Michael’s godparents, threw a surprise baby shower at their home in New Jersey with almost the entire club attending.

For the next two-and-a-half years Michael joined us at every fly-in and IAGSDC convention, especially Miami, Washington, and of course NY. We continued to bring him to Tuesday night dances at PS 3 and Fridays at the community center where half the members fought to watch over him while Mitch and I danced or Mitch was calling.

In the fall of ’92 we moved down to Orlando and never found a local club but did manage to keep in touch with a few of the club members, always looking forward to Gay Days at Disney where we were sure to see some of the old gang. We hear from Michael Gravois and Bob Young and follow the antics of the crowd on You Tube (especially conventions).

Michael met Tatiana Rogriguez in 2019 and had planned to marry in 2020, but COVID-19 put a delay on those plans. They finally tied the knot on April 17th, 2021 at Oak Plantation Resort (where I’m the controller so the price was right.) Jorge and Jessie (Tatiana’s parents) as well as the rest of her huge family are the best and sweetest people there are.

They have given us a granddaughter who was born in November of 2019 (Cataleya….Leya for short), with another granddaughter expected in early October. Mitch and I were legally married in NYC seven years ago (2014) and are now celebrating our 45th year together.

Our best to all the club members past and present, and we hope this lets the old timers see the completion of our square. Feel free to contact me at HalKleinOrl@aol.com.”

Hal has shared a photo album with pics of Michael from his earliest days in 1990 to his wedding in 2021. See them here.