While attending a destination wedding in Vancouver, British Colombia, Kian and I attended a square dance event sponsored by the Chuckwagon8’s in nearby Burnaby. When we arrived we were asked if we chose to attend because this was the night they were celebrating the Scottish poet, Robbie Burns, and all things Scottish. That explained why the caller was wearing a kilt, the walls were draped with tartans and everyone was wearing plaid.

When one of the dancers asked me if I liked haggis, I thought it was a test of my knowledge of Scottish customs. I said that I knew it’s made up of ground-up organ meats of sheep wrapped in the stomach and cooked somehow. What I didn’t say was that, unless you grew up eating it at a very young age, it is supposed to be absolutely repulsive. Then another dancer added that she had just returned form the kitchen and it smelled like it was almost done. Oh God! 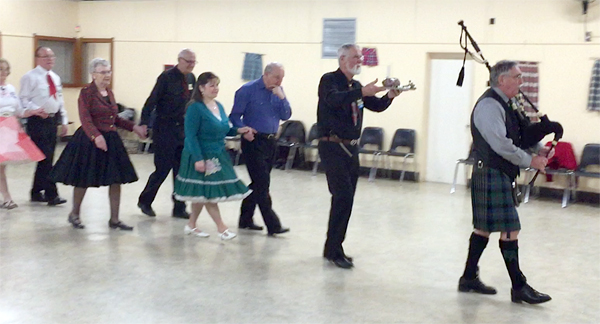 At the midpoint in the dance, we were all asked to find a partner and form up for the Grand March. The procession was lead by a bag piper, who “piped in” the haggis, followed by a man holding aloft the platter with the haggis. When the haggis was set on a table at the front of the hall and the dancers were all in rows of eight, one of the members read the poem, Address to a Haggis, by Robby Burns. Because he was reading in the original Scottish dialect, I understood less than one in ten words. But here’s a translation of a couple of the verses I found online:

Then tables and chairs were brought out and the haggis was served. Being a guest I saw no way around at least trying it. It was a little dry, but other than that it wasn’t bad at all. Later I was told that the version popular in this area, is heavy on the onions, oatmeal, suet and spices and lighter on the heart, liver and lungs. Coffee, tea and assorted goodies rounded out the offerings and after fifteen or twenty minutes the tables were trundled away and the dancing resumed. This group has their hospitality down pat. The rest period in the middle of each dance is a wonderful time to socialize and get to know everyone while you recharge your batteries. Many club members greeted us, not just the leaders of the group. We also received “guest badges” so that all the dancers knew who we were. We even got a door-to-door ride back to our hotel which saved us a long trip back to the city in the pouring rain.

So to all our new friends at Chuckwagon8’s here’s a Scottish wish for you: Lang may yer lum reek.(lum = chimney, reek = smoke)

Translation: I wish you well for the future.