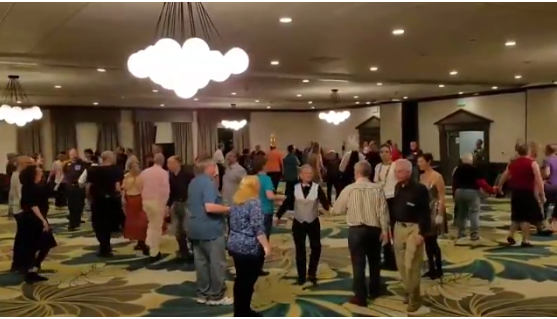 WILMINGTON DE, MARCH 31-APRIL 2, 2017. Attending the Fly In – that 3-day dance party – put on by Independence Squares was a wonderful reminder of how much fun Square Dancing can be. The intensity of a concentrated, energetic three-day dance marathon, especially in the context of the International Association of Gay Square Dance Clubs (“IAGSDC”), can be exhilarating, and is a synthesis of everything we’ve come to revere as square dancers, in this great recreational and social network. Independence Squares did a terrific job of reminding just what a Fly In does, and can be, because it did all those things and with aplomb!

A Fly In reinforces your skills and standing as a square dancer in relation to the greater Community with others who share your enthusiasm, and with some of the greatest Callers in the Land. It’s payback for all those hours of study, memorization of definitions, and hours of practice you’ve dedicated. It justifies through dancing well, the dollars invested in countless classes, workshops, travel to events, and Conventions over the years of honing your craft.

A Fly In provides opportunities for socializing with old friends, and making new ones, especially nowadays, in this impersonal, app-driven world, and most important, it gets you out of your rut and into a state of renewal at a festival. It’s a re-affirmation that one of the most rewarding things we can do in this world is to get out and square dance! For me at least, a Fly In does all those things. And the Independence Squares knows how to put on a Fly In!

The festivities for the Philadelphia Freedom Fly-In, 25th Anniversary Celebration “Silver Belles and Beaus” began for us on Friday, March 31st at the Doubletree Hotel in Wilmington DE. The world-class trio of the weekend’s callers. Sandie Bryant, Chris Phillips and Jet Roberts, with cameo appearances by Gay Callers Association (“GCA”) callers started the 38 hours of dancing at 7 PM with programs spanning Mainstream through Challenge 2.

The Doubletree has been the host hotel for many years. It’s accessible by Light Rail, Bus, Amtrak, and centrally located between New York City, Philadelphia, Washington DC, and other East Coast cities and countrysides. It’s within walking distance of restaurants, shops, and a Mall. It also boasts a decent affordable restaurant and bar within the hotel, so no one ever actually has to leave. And if only that bar could talk – it’s been privy to many laughs, heart-to-hearts, and tales out-of-school winding down after the last All Skate Tip of the evening for both callers and dancers alike.

The layout of ballrooms was very conducive for hopping between dance programs, having one central hallway with contiguous rooms which also served as a registration and basket raffle area. Regrettably, I understand that this venue will not be available for the 2018 Fly In, plans for which are already underway and a new venue is on the horizon.

The Schedule, artfully designed by Tim Harper, distributed time allotments across the programs giving ample time for socializing, especially during the 5:30-8:00 Saturday night dinner break. Though a Fly In weekend can be a boot-camp-style schedule, taps sounded not as early as usual, with dancing on Saturday at 9:30 AM through the evening April Fool’s Formal Ball ending at 11 PM. At the Ball, an informal count of squares of alternating programs yielded maximums of 5 MS, 9 A2, 3 C1 and 2 C2 – sorry, I missed the Plus count. On Saturday AM, there was a tally of at least 137 registrants, with more walk-ins for the Saturday Night Costume Formal.

Specialty tips in the Schedule really played to the callers’ strengths. Sandy’s “Sandie Shows the Way” DBD MS Workshop assayed her dogged insistence on attention to detail and precision. At C1, her Plenty call from Hourglass perplexed, to say the least. Chris’ “Cookin with Chris” (Plus Hot Hash) was the perfect vehicle for his ability to inspire, and move dancers into position at a high pace with choreography emphasizing agility; “Jammin with Jet – MS & Plus Singing Calls” flaunted Jet Roberts’ tremendous voice, which could be deployed to at any half-time for the Star Spangled Banner. One of his mottos “I want you to succeed” was re-enforced as he cued the floor through various odd Motivates and Trade Circulates while sustaining the enthusiasm. I think his favorite call must be “All 8 Square Chain Thru” from a static square, so workshop that before you dance with him again!

Baskets and silent auctions were in full display and for bidding, and the report came in afterward that income of at least $3000 was reported from basket sales alone. There were also door prizes from many local restaurants. I won a Gift Certificate Door Prize to one of my favorite restaurants, The Olive Garden (right across the 8-lane highway), as one of about five bestowed. These corollary events: the 50/50 Drawings, the Baskets, the Costume Parade and Contest helped contribute to the “Town Square Street Fair” nature of the Fly In, and brought people together in yet another way.

The Independence Squares had an active and gracious, welcoming presence and personality throughout. It was clear everyone pitched in and with a smile at every turn. Dane Bragg eloquently served as Master of Ceremonies for the brief announcements that ensued. In closing he spoke of how there were too many people to mention by name involved in the planning and execution of “Silver Belles and Beaus” (Baskets, Registration, Hotel Negotiation, Door Prizes, to name a few positions), but that he did want to express his gratitude to US, those of us who attended, who matter so much for the success of a Fly In.

So if you were at “Silver Belles and Beaus” remember how great it was to spend a weekend with your best friends, dancing to cream-of-the-crop callers, and how you felt being part of the great International Square Dance Community and treated as a guest of the highest calibre. Remember how it was when you started out in your first Mainstream class, trace how far you’ve come, and how it never dawned on you how important Square Dancing would become in your life. Tally up all the hours and expenses you’ve invested, and realize how rewarding it all has been. Now, get out there, and DANCE!

Here’s a video of A2 on Saturday night with Sandie Bryant calling!

Here’s a video of the Saturday Night Mainstream tip, with Sandi Chris and Jet calling.  Where’s the Bathroom on the Right!

Here’s a link to my Facebook Photo album from the Philadelphia Freedom Fly In:

Having a (Beach) Ball in Rehoboth with Chesapeake Squares

It Takes a Village in Decatur Georgia to Put on a Fly In!

“Why At My Club?” By Roy Gotta reprinted from the February 1994 issue of American Square Dance Magazine.